You guys have no idea how long we’ve been waiting to show you this.
Those of you who are forum regulars will no doubt recall that @Crypt, @dky.tehkingd.u, @MichaelTannock and I, along with a few other dedicated individuals, created the Hazard Course addon for the mod version of Black Mesa, but we’ve been fairly silent since then. That silence was not because we stopped working together, but because we were in pre-production of a new project. We’re now ready to show our creation to the world - may I present to you, Peer Review!

After several years in quiet pre-production, we’re proud to finally announce what we hope will fill the last Half-Life-remake-shaped hole in our collective hearts: our team, PSR Digital, is officially working on Peer Review, a re-imagining of the Half-Life expansion, Half-Life: Decay, in the Source Engine.

There have been several attempts at Half-Life: Decay remakes in the past. So far, none of them have borne fruit. We’re hoping to change that.

Of course we are, at present, only 5 people. It’s gonna take us a while to remake the entire Decay campaign, far longer than we’d like. So we’re hiring. If making the last Half-Life expansion remake sounds like your cup of tea, check out our Jobs page on ModDB and see if there’s a role that suits you, and shoot us an application if you’re interested in working with us.

Thank you, and have a very safe, and productive, day.

Looks pretty good so far! I like the addition of voice commands, especially the ones with pinging features.
I have a question, though: will there be singleplayer support for those without friends, such as that seen in the PC port of Decay?

Looks amazing. Never got to play Decay, so looking forward to this loads. Also ‘Peer Review’ is a great name in the Half-Life convention, better I think for a co-op game than ‘Decay’ anyway!

will there be singleplayer support for those without friends, such as that seen in the PC port of Decay ?

We have plans for a singleplayer mode. Of course, this is still pre-alpha, blah blah blah, scope of the project may change between now and release, etc. But yes, there are plans for this.

Damn, that‘s quite a surprise! It‘s looks like it could be really awesome! Glad, you already figured out an interesting way of implementing coop, with some nice use of environment! I ferl like many of the other mods that attempted to convert Decay were struggling with the actual coop side of things. Looking forward where this‘ll be heading towards! Good luck!

But…i gotta ask: weren‘t you guys working on something completely different? I think it was called „Aurelis 403“ iirc. You know, that project whose development was supposed to be completely public. Yeah, I didn‘t forget about that. Whatever happend to it?

The state of 403 Aurelius is addressed in the FAQ of our announcement article: 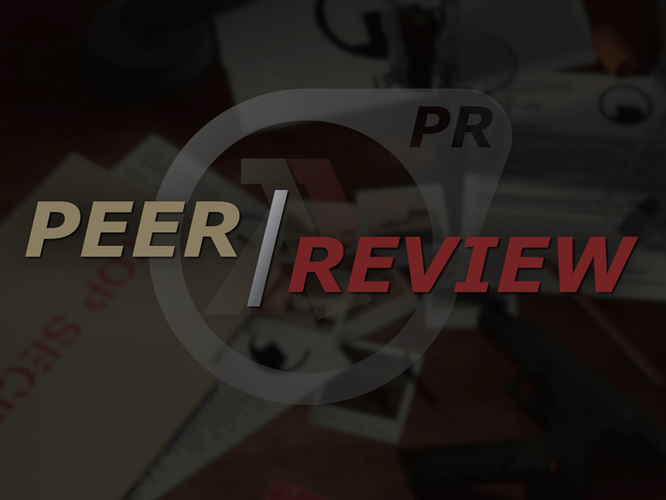 At long last, after years in pre-production, we're finally able to show you guys what we've been quietly working on in the shadows. Here it is-- a small proof-of-concept sneak peek at the next project in our team's pipeline. I hope you enjoy it as...

In short, we’ve put it on hiatus to focus on Peer Review for now. But we still like the idea of Aurelius enough that we definitely want to return to it someday!

I got something in the works myself, I can’t wait to announce it.

This is looks awesome. I love that you’re including the ability to flag stuff!

A minor news update for everyone:

Now that we’ve gotten the industry-mandated April Fools’ Day shenanigans out of our system, we at PSR would like to offer you guys a bit of a consolation update...

Hey folks, long time no post! We’ve been hard at work, and we have some new media for you!

First, a few shots to wet your appetite:

You can check out the full update here!